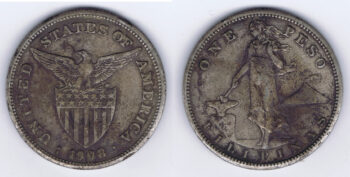 For just over 30 years the Philippines was administered by America. During this period the first and only colonial silver dollar was created for the Philippines at the San Francisco Mint.

This magnificent One Peso silver coin depicts a woman, representative of the islands ( but really the daughter of the coin’s engraver ) with hammer & anvil and background of Mayon Volcano. The reverse features the American eagle atop the shield and words ” United States of America ”

When the Japanese invaded the Philippines in 1942, many of these silver coins were dumped in the sea off Corregidor, to prevent the invaders from having ready access to this form of hard funds.

Featured is an example pulled from the sea, after the war.

This is the exact item offered – If multiples of the same are ordered, they would be similar but not exactly like the one shown.