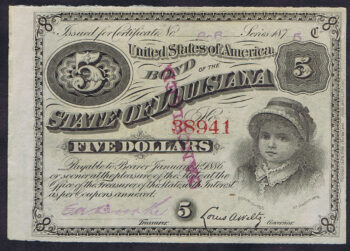 Louisiana’s Battle of Liberty Place was an attempted insurrection by the Crescent City White League (made up of Civil War veterans) against the Reconstruction of the state government on September 14, 1874 (primarily the Metropolitan Police & State Militia, added to troops sent by President Grant). E.A. Burke was accused of misappropriation of funds and later fled to Honduras with a pile of money that he acquired while serving as State Treasurer. These cancelled $5 Baby Bonds were also signed by German-American Governor Louis Wiltz

Quality; You will receive what is pictured or better. Guaranteed Genuine.