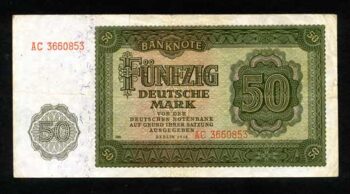 In the closing days of the second World War, Soviet troops moving in from the east occupied 5 German provinces (Brandenburg, Mecklenburg, Saxony, Saxony – Anhalt and Thuringia) which at the cessation of hostilities became the occupation zone administered by the Russians. The other three zones were run by the USA, Great Britain and France, respectively. Under the Potsdam accord Germany was to be jointly managed by the mutual consent of the Commanders in Chief of the 4 controlling countries. As the Soviets dug in their heels at every opportunity, Germany was finally partitioned into East (DDR) & Western sections.

Here is the first non – Soviet banknote issued by the German Democratic Republic (50 Deutsche Mark), dated Berlin 1948, although only formulated as a Nation on 7 October, 1949.