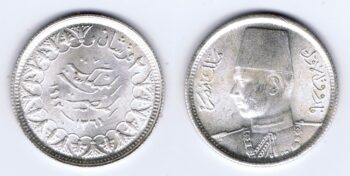 Egypt’s central position in the arena of WWII was most important.

Mussolini had made no secret of his desire to construct a huge Mediterranean empire at the expense of the British. He planned to move one army northward from Italian East Africa and send a second army eastward into Egypt from Libya. He hoped to catch the British in an African vise and eliminate them.

Here from the land of the Suez Canal, is Egypt’s coinage tribute. These lovely uncirculated two piasters silver coins issued during World War II ( 1942 ), depicting King Farouk on the obverse. All in extremely circulated condition.