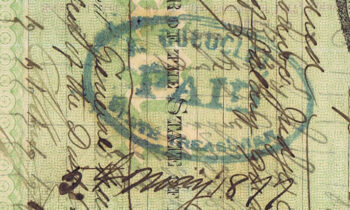 Antoine Dubuclet (1810-1887) was an Afro – American who was elected twice as the Louisiana State Treasurer (10 years) to reduce the debt of the Civil War ravaged economy. He was the only office holder permitted to remain during the Battle of Liberty Place and his PAID seal is featured on this certificate.