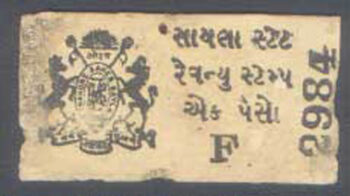 At the outbreak of World War II in 1939 until about 1942, the British were in severe straits. Most metals had disappeared from local usage throughout their vast empire to go into the war effort. It was most evident in the coins being pulled from circulation. As the Indian continent represented a vast territory with a tremendous amount of circulating coinage, it was here that the greatest need for a substitute arose. This gave rise to the need for some form of ‘small change’ and thus was born the cash coupons of the Indian Princely States.

Here is a ‘cash coupon’ of Sayala’ (formerly Kathiawar which merged into Saurashtra, but is now part of Gujrat) which occupied an area of approximately 200+ square miles and contained one large town and nearly 40 villages during this WWII period. The coupon shows the official state coat of arms and represents a value of 1 Paisa (4 Paisa equaled an Anna and 64 Paisa made a Rupee). This example has a break (akin to a fold in paper) in the upper right corner along with some border erosion or slight water stain.