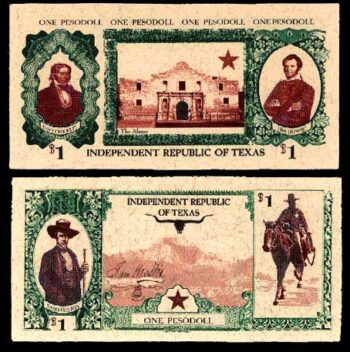 According to the Texas Militia, a new republic had been formed with its own presidency, courts, cabinet, currency and web-site (December 27, 1995). Articles about this break – away ‘state’ appeared in both the domestic and international press. The center of this movement is in the town of Fort Davis (named for the last great secessionist, and confederate – Jefferson Davis) . The group’s antics had been mild and included trying to kick out Texas Governor G.W.Bush (former President), calling him an impostor, and filing claims at the International Court of Justice in the Hague. They were later raided by the same US Enforcement agency (Alcohol, Tobacco & Firearms. Several members of this militia group were eventually captured and at least one was killed.

The money of this small band, supposedly circulated throughout Western Texas and is known as the Pesodoll (presumably a mix between the peso and the dollar). These notes are approximately the same size as regular US currency and depict many features unique to Texas, including portraits of Sam Houston (plus fancy signature), Davy Crockett and Jim Bowie. Further design elements include the Texas star above the Alamo, mountains of West Texas and Texas Ranger on horseback. Each is attractively printed on slightly grainy paper with meshed multi – colored threads . We do not suppose that this is real money in any way, but a nice Texas type souvenir. Offered as a complete set of 7 values; 1Ps, 2Ps, 5Ps, 10Ps, 20Ps, 50 Ps & 100Ps.