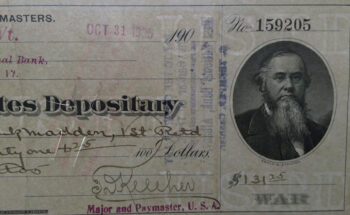 This United States bank had been designated by the Secretary of the Treasury as an official depositary to hold U.S. Government funds

Pictured on the right of the Check is Edwin M Stanton the Secretary of War under President Abraham Lincoln, who also took charge of the Scene at Ford’s Theater.

Quality; You will receive what is pictured or better. Guaranteed Genuine.